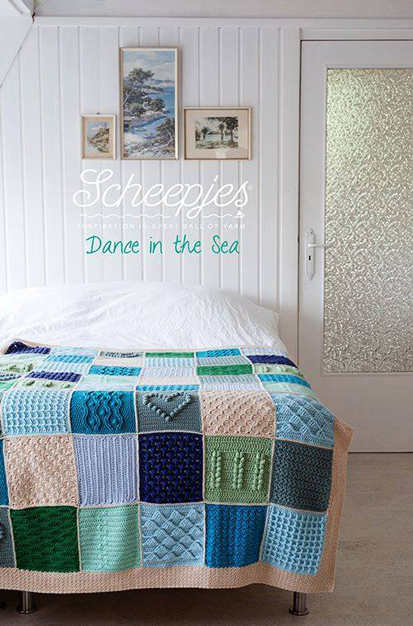 I knew for quite some time that Scheepjes was working on a new CAL (Crochet-A-Long). Marinke was designing a CAL just before she died, but as you know, she never got to finish it. Scheepjes took her ideas, and with the Scheepjes bloggers they turned it in this beautiful blanket! The only thing I new was that it was beach themed, but really, that could go so many ways. I also never saw her work on this blanket so it was a total surprise how it would look in the end.

I wont lie, when I first saw the blanket it brought tears to my eyes. It is so beautiful, with all those different squares and beautiful sea inspired colours. They have three colourpacks to choose from and I chose this one: ‘Dance in the sea’, for it’s gorgeous green and blue hue’s. It totally spoke to me.

The blanket was presented to the family as a gift from Scheepjes. They really are involved in Marinke’s work and her family. It’s heartwarming to experience. When I first saw the complete blanket in person it was even better than in the pictures! Super soft and so much texture and colour going on. Really an heirloom piece to treasure forever.

Each square was designed by a different scheepjes blogger. This square is from week one and represents kelp, according to Esther from Happy in Red.  This square is really great for practicing your popcorn stitches I tell you 🙂 Week two square was designed by Kirsten from Haak Maar Raak. She loves star stitch so this was what she used! I never crocheted star stitch before, but it works like a dream, and creates such a pretty texture! This gorgeous square was designed by Tatsiana from Lilla Bjorn Crochet. You might know her from her gorgeous mandalas and overlay crochet! Definitely one of my favorites, although I understand that it’s quite the challenge for the beginners among the crocheters 🙂 She was inspired by the waves of the sea and the sun on the horizon.

Of course we’re now already in week four, and I’ve made those squares too, but I didn’t have the time to get them blocked before making these photo’s. Something for another blog post 🙂

Thousands of crocheters all over the world are crocheting along to make this blanket. It’s so inspiring to see all those people working on the same project. All those people who wanted to be part of this CAL and pay homage to Marinke’s life and work. It shows once more that we, as a family, are not the only ones who miss her so much every day.

I just wish she could have experienced for herself how much lives she touched, as a person and through her work.

This one’s for you Marinke. I will make you proud!