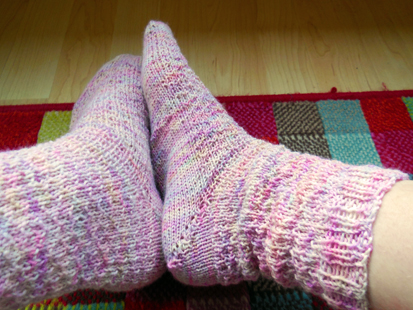 In December last year, I decided to finally begin sock knitting. I was convinced that I would never knit socks, but the gorgeous photos on instagram and pinterest convinced me to give it a try (damn you internet). To my own amazement I already had sock yarn in my stash! Of course I didn’t want to do a plain sock, it had to be stunning! So then I began looking for an interesting pattern on ravelry. I quickly found what I was looking for! It was the Hermione’s everyday socks pattern. I already came across it a few times on instagram, and I loved it! The only problem was, that it was a cuff down pattern, and that was not what I wanted. So instead of following the pattern, I only used the pattern stitch and here is the result! Not bad for a first time sock knitter huh. 🙂 The yarn I used was astashaddict yarn in the unicorn hair color way. I ordered two skeins a while back, without knowing what to make with it, but I had to have it! (Don’t we all have that problem). I was initially going to use it for a sweater in stockinette stitch, but had to gave up, because my wrist didn’t agree with all the purl rows I had to do. For the sweater I also got little balls of blue yarn, which also happened to be sock yarn. So you can guess what I did with those balls ;). Yes exactly! I made another pair of socks, using the same stitch pattern. I like this pattern a lot, because it consists of mostly knit stitches, and I like my knit stitches. These socks are so warm and cosy, it won’t take long before I grab some needles, and whip up another pair! This is the result so far! As you can see, I’m putting my mini skein pouch to good use. I just love how these colors work up! The fun thing about variegated yarn, is that you never know how it’s going to look like, and I am totally in love! I used a plain color in between, to make it more stripy, and so far it worked out great! These colors go so well with each other, it makes me feel like a hippo in heat, on drugs 🙂 I’m loving it that much! So this isn’t probably the last time you will see this yarn in a project;)

What yarn do you love?