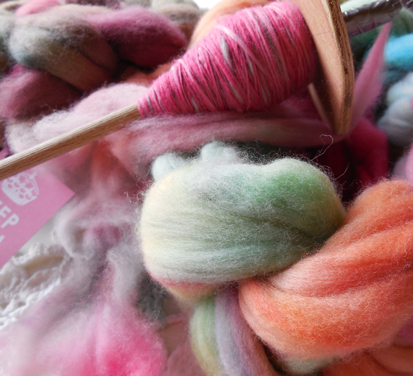 Hi there! It has been 2 months since I last posted something, wow! I’ve been very busy with two exams. One I ended up cancelling, because I really wasn’t into it. The second is a sewing exam again! I’m now going for apprentice-tailor (or student-tailor). This means I have to make three new clothing pieces again; a children’s coat, a woman’s blazer and woman’s pants. I finished the children’s coat today. Phew, it was quite the labor! I have taken pictures, but none of them were nice enough to put on the blog, so I’m going to re-shoot them again this weekend, hoping I can show you all next week.

I also have done quite some dyeing and spinning again, but that’s something that deserves its own post, trust me 😉 Here’s a picture to get your wooly juices flowing 🙂

After the Breidag I began a new scarf (since you can never have enough of those), making up the pattern as I go. The ones that also follow me on instagram might already have seen a sneak peek! I wanted to experiment with stripes, chevron and short rows, so there is something in the pattern for everyone.This crochet pattern will be online and free when it’s done. Yay 🙂 The yarn I used (among others) is from dutch wool diva. You can see the skein I bought at the Breidag fair in this post.

I’m also working on a headband called ‘womb of wisdom’, a free pattern made by ayarnlovingmama. It is the perfect pattern when you want to learn/do cabling that isn’t too difficult and need something to protect your ears from the arctic winds that are approaching. I am using my very own, very first handspun for it, and boy is it soft! Again, this deserves a post of its own:)

As you can see, I’ve been doing all kinds of stuff and I hope I can get back on track with all the things I have yet to post about!